As we are English ironmongers

in England we mainly know about and sell good quality English made locks, such as those from Chubb, Banham, Union (Josiah Parkes), Squire, Legge, ERA, Yale and smaller firms such as Guardian, John Worrall etc.

We also sell excellent locks made in the time honoured way by the Quality Lock Co Ltd of Willenhall. This is a small firm still run by its founder Mr Peter Cartwright, who still makes solid brass rim locks in Victorian patterns.

Early locks were simply lockable bolts and have been traced back to Egyptian times when a simple method of lifting pins with a wooden ‘key’ was used.

Romans tended to lock valuable chests and coffers with ‘padlocks’ made of metal with bronze or iron keys, that have been found at sites such as Herculaneum and Pompeii. Generally Roman keys were merely inserted to release a staple from the padlock body. We have to wait until the Mediaeval period until keys began to turn to unlock more sophisticated mechanisms. Big heavy handmade iron mechanisms were often incased in wood and used on Church doors, with large unwieldy iron keys.

In the Renaissance era keys were made of the pipe fashion, where the key had to fit over a pin in the keyhole . Some of the most beautiful keys date to the 15th and 16th centuries with intricate detailing and elegant piercing made with exacting workmanship.

It goes without saying that all locks from this period were handmade and unique. Truly a craft that required a long apprenticeship with locks that were surface mounted and often ornately decorated.

With the coming of the industrial revolution in Britain, lock development became rapid and manufacture began to be uniform. Key figures included Robert Barron in 1778 inventing the tumbler lock, shortly followed by Yorkshire man Joseph Bramah who is credited with the cylinder lock, six years later, a precursor to todays ubiquitous Yale type cylinder front door locks. Indeed although the Bramah lock was technically innovative and secure, the keys were difficult to replicate and so similar latterly designed Yale locks proved to be more commercially acceptable . (A similar fate that befell VHS and Betamax in the 1980s ). The pin tumbler locks of the Yales, Linus senior and Linus junior of Conneticut USA were first begun in 1848, and are still used in great quantity throughout the world.

The name of Chubb is synonymous for a period of over 190 years now with high quality lever locks of outstanding security. First patented by a certain Jeremiah Chubb of Portsmouth in 1818, Chubb locks are still available today from Hinges & Brackets, and made to high British Standards of security. Chubb are now known for all sorts of door and safe locks.

Timed locks for bank vaults and safes were initiated in Scotland, by a bank agent Williams Rutherford in 1831 following an increase in robberies. Indeed it is the nature of increased incidence of crime over the last century that has seen the proliferation of all manner of different locking mechanisms for virtually anything. 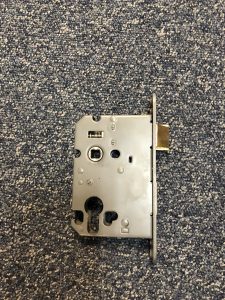 Today we can have locks operated electronically by the use of Biometrics, such as retina recognition or fingerprint recognition, or indeed the ubiquitous remote control ‘zapper’ for cars and alike. From masterkey systems for hotels, prisons and commercial buildings to computer controlled remote access, locks will continue to be developed and used wherever someone has to be kept out OR in!

Click the links below to visit our specialist sites: